One of my goals for this year is that we get the boys involved more in making meals. Simon is a pro at making pancakes now, of course they can get their own cereal and make a sandwich or such but I would like them to be more involved in the dinner prep.  Mainly so they don’t drive me batty while I’m cooking dinner, but also because I feel they are more likely to enjoy the food if they help prepare it.  Tonight without any prompting Simon asked if he could help with dinner and Owen wanted to join in. Even though I was making a dish that Simon doesn’t particularly like (even though the rest of us love it) he was still willing and eager to help.

Simon chopped the broccoli, Owen grated cheese and chopped onions.  There wasn’t much else to do away from the stove so that was it for tonight, but it was great, saved me a bunch of time and they thought it was good fun.  Bonus is that they weren’t chasing each other or fighting during this time they were helping!

Last Friday we hosted a homeschool gathering where the kids did presentations…some of them show and tell style, others more report style.  One of the few things that I think we lack by homeschooling is a chance to frequently present or share information in front of or with peers.  As many students go back to school and present a book report, a service project report or some other such presentation to being the school year I thought it would be neat if we gave our homeschool students an audience to share something they were interested in.  There were no limits to what they could present and all the children were given a choice of presenting to the larger audience or to a smaller group.  They all chose the larger audience, a fact which impressed me greatly. 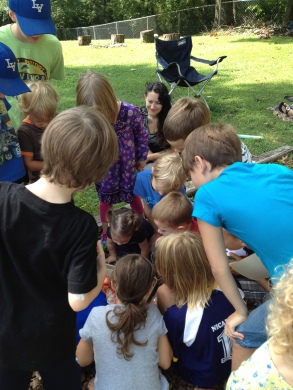 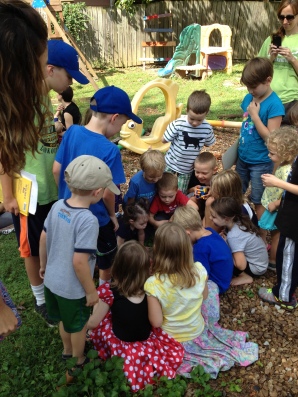 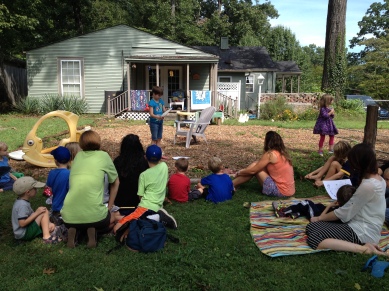 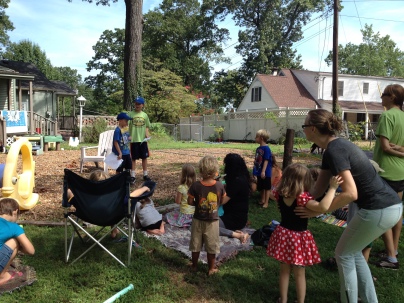 They all did a great job, from age 3 to age 11.  We had volcano experiments, a door/wall climbing demonstration (bet you can’t guess who that was!), creative creations, a lego cable car, art exhibition, reports on animals (complete with live snails), sharing of a favorite blanket, yoga, magnets, compasses, precious snow globes, little ponies and more.  It was wonderful to see them giving their attention to whoever was in front of the audience presenting.  We were also very lucky to have some beautiful weather so we could hold the event outdoors where everyone could be comfortable and chat and move as they needed to.  Hmmm…so outdoors, we had kids ages 3-11 all listening and paying attention to each other and learning new things.  Crazy homeschoolers huh?

Last week some friends were posting about the Perseid Meteor shower and I started to think we should try to go camping somewhere we would have a better view.  We already had plans for Friday so I figured we could go Wednesday and Thursday.  It just so happened that Thursday was the first day of public school in our county, so we felt pretty fortunate to be homeschooling!

I was prepared to go with the boys on my own but Rick was ready and able to come along so that was great.  We decided on Harrison Bay State Park because it was close and had cheap tent sites along the water.  We had only been up there once or twice before to swim in the pool and explore a bit.  Boy were we missing out. 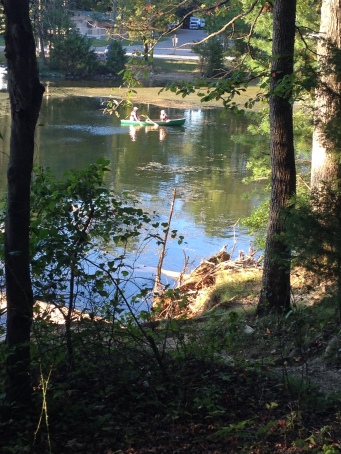 It is 20 minutes from our house and we saw tons of wildlife, and felt like we were far away in the woods.  We saw racoons, deer, osprey, herons, squirrels, a water snake, a toad, a spider spinning a web, and more. 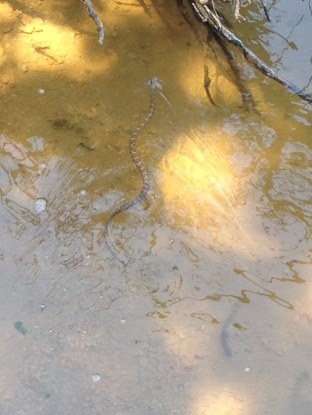 We had some good friends tag along for Thursday night and just so happened to be camping next to some other homeschool friends too!  The weather was great.  We got to see a few meteors, it wasn’t as dark as we hoped since all the campers apparently feel the need for really bright lights!  Simon enjoyed fishing (a lot!) and the guys took the canoe out a few times to paddle and fish.  They also got to take their friends on the canoe which was great too.

Below is a photo of Simon explaining the good news and bad news of fishing.  The line was caught, but it could be untangled if they went out in the canoe! 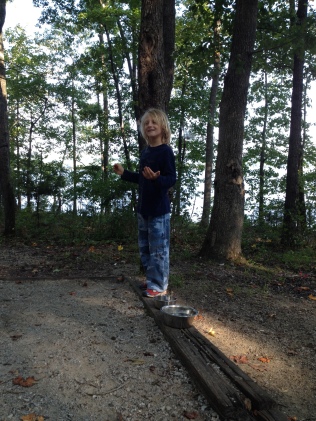 I found this neat activity to work on understanding place value.  I knew the boys would be eager to at least try it because of the marshmallows!  They were eager to try it, but not so eager to do the number activity associated with it.  They just wanted to build snowmen like we did one time before.  I convinced Simon to at least show me a couple of the numbers with the cereal on the toothpicks and then I gave them pretzel sticks and chocolate chips and they went to town building!  Luckily he showed me he has a pretty darn good grasp of place value anyway.  Good fine motor work for Owen.  I had given him a few small numbers to create with the cereal, just trying to give him an idea of what Simon was learning.  He at least gave it some thought. 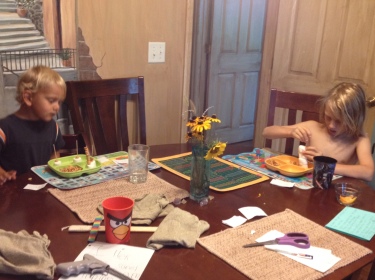 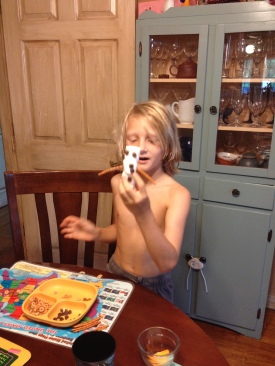 Rick and I spent a bit of time rearranging our front room to make the classroom space more usable and separate from the toys.  Last year we often had to spend a fair amount of time getting the toys out of the way before we could sit at the desks or on the floor to do some schoolwork.  I wanted that obstacle out of our way this year.

I also set up a binder system in efforts to keep track of what we were doing each day/week and have a place to hold all the printouts or game pieces we would be using for each activity.  That was also a problem last year…keeping things in too many different places and not being able to find them when I needed them.  I have been using the binder system for a few weeks now and I have reused my weekly schedule and it’s activities a couple of times because we have been having a lot of other activities come up.  But that’s the way we plan to do things, we’re not staying home on a beautiful day just because the schedule says we are supposed to be studying lakes and rivers of China or place value! 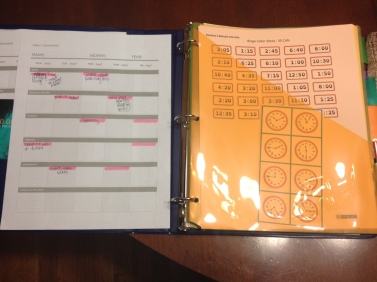 Each boy has a journal, Simon and I write back in forth in his and Owen has one to write or draw in whenever he feels the urge.  Sometimes I will write in my own journal while Simon writes in his.  Last year he told me he liked writing in school more than at home because other people were writing at the same time, so I told him I was happy to write in my journal when he wrote in his.  His journal has a bookmark with our names on opposite sides so we can put it in the page we are working on and let the other know it’s their turn to write. 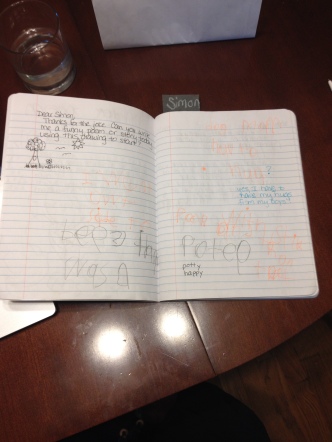 lifting the veil to stop the stigma

From My Little Corner of the World

An Adventure in Learning

"The only reason not to do it would be fear, and fear is never a good reason to not do anything"--Tom Balazs

plus1blog.wordpress.com/
love and biscuits
Confessions of a Misplaced Alaskan

About me, my family and the life we live.

Peaceful Parenting for a Hectic World